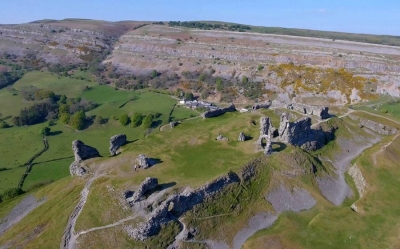 Castell Dinas Brân is a medieval castle located within the earthworks of an earlier Iron Age hillfort and was probably built in the 1260s by Gruffudd ap Madog, Lord of Powys Fadog.

Its existence as a castle was short-lived as it was burned down by the Welsh at the time of Edward I's campaign, to prevent it being taken by the English, and abandoned in 1282.

At some point after it ceased to be a stronghold, part of it was probably used as a dwelling, as it is reputed to be the home of Myfanwy Fychan in the 14th century.
A bard, Hywel ap Einion Llygliw, c.1330-1370, wrote a love poem to Myfanwy Fychan of Castell Dinas Brân.

The site which rises to a thousand feet (307m) must have retained some importance even after it was abandoned as it is said to have been attacked by Owain Glyndwr in 1402, although it seems he failed to capture it.

For the energetic, there is a path to the top with the reward of a fantastic view over the valley and to the hills beyond.