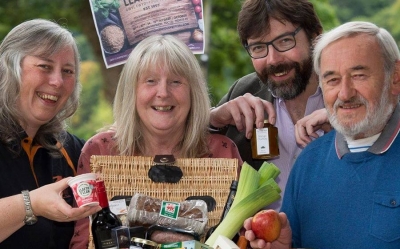 For one glorious weekend in October, Llangollen turns into the culinary centre of Wales as some of Europe's top producers come together at the Llangollen Royal International Pavilion.

One of the first and most successful food festivals in Wales, representatives from as far afield as Spain, Poland, Italy and France annually take part, giving the whole event a real European flavour.

Developed originally as a showcase for traditional food producers in the counties of Denbighshire and Conwy, the event has grown from one room in the International Pavilion to now filling the whole building and sometimes spreading into Llangollen itself!

Visitors to the Festival are always amazed at the mixture of different smells that seem to blend into one distinctive aroma, almost unique to Llangollen.

Over 100 different exhibitors offer everything from organic meats to fruit lacquers, Welsh cheeses, bread, chocolate, fish - in fact, you think of a food product and chances are you'll find it at this fantastic culinary event.

Many local food producers also take the opportunity to promote their produce and of course this can be found in the shops in town, the rest of the year.