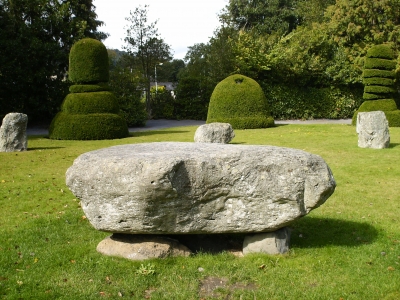 was not a perfect example of its kind, it was important in the development of the National Eisteddfods

which have followed ever since. It could be said to have been an eisteddfod of ‘firsts’.

as a tune called Glan Rhondda composed by James James in 1856 appeared.

by John Owen (Owain Alaw), given words by Evan James and eventually adopted as the national anthem of Wales.

John Ceiriog Hughes (Ceiriog) won the silver crown with his love poem on Myfanwy Fychan and began his illustrious career.

The eisteddfod was widely advertised in Welsh and English newspapers, even as far as America

and it was probably the first time Welsh exiles were invited.

Pictured is the Logan Stone in the centre of the bardic circle, used for the 1908 Eisteddfod

in the grounds of Plas Newydd.