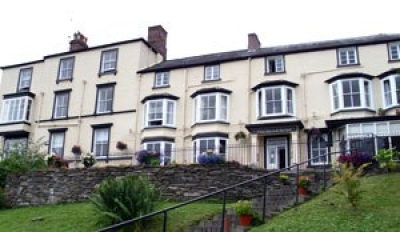 The Hand Hotel in Church Street dates at least from the early 1700s and was one of several coaching inns,

serving travellers en route from London to Ireland. It was also possible to hire a chaise and four with a driver

and the Ladies of Llangollen often used this service for their visits to their friends if it was too far to walk.

This could be quite expensive and at one point they ran up a huge bill, which caused a rift with the landlord of the Hand.

For a while they moved their patronage to the Lyon but eventually settled the debt and returned to the Hand.

Visitors to the area will notice there are several hotels and pubs called the Hand.

The name derives from the bloody red hand on the coat of arms of the Myddleton family of Chirk Castle,

major landowners in the area at the time. More information: