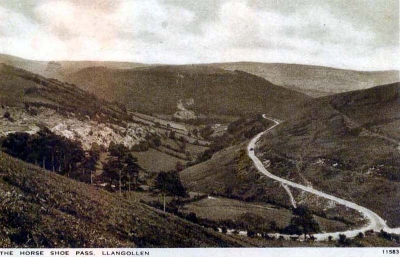 The Horseshoe Pass (A542), known in Welsh as Bwlch yr Oernant (pass of the cold stream),

dates from 1811 and was one of a series of turnpike roads. Before then, the main route

as, ‘prodigiously steep and continues so for a mile and a half’.

The name probably comes from the horseshoe shape it forms round the sides of the valley. It rises to 1367 feet (417 metres)

and can be closed by snow in the winter months. An entry in the journal of Lady Eleanor Butler for February 2nd 1814

records the fate of the Hand coachman and four horses lost in the snow on the way back from Ruthin.

Although two horses were lost, ‘He was providentially discovered when quite exhausted after crawling on his hands and knees....

One horse found its way home some hours after, the other, a blind one, had the extraordinary sagacity to remain stationary

until she was sought and found in the morning’.