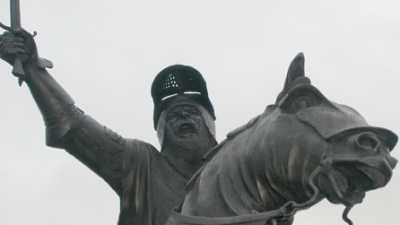 and regarded as the last native Prince of Wales.

rule of Wales in the early years of the 15th century. He assembled a parliament

when his family was taken prisoner, and he and his followers were forced to become guerrilla fighters.

He seems to have disappeared into history, and just as his date of birth is uncertain,

it is not known exactly where or when he died.

In recent years a fine statue of him on his horse has been erected on the square in Corwen.

The area around Llangollen and Corwen has often been referred to as ‘Glyndŵr Country’.