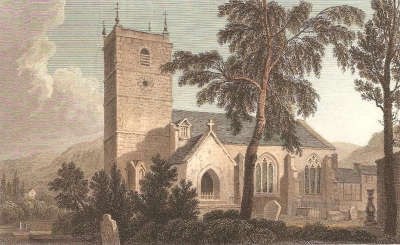 St Collen's church is dedicated to a 7th century monk, Collen, who, legend has it

arrived in Llangollen by coracle.

It is possible there was already a church established on this site in the 6th century.

The present building dates mainly from the 13th century and was a typical north Wales two-nave church.

In the 1860s the church was extended with a south nave and chancel to the east. The most remarkable feature of the church

is the oak hammer beam roof of the central nave.

An earlier roof was destroyed in a fire on St Collen's day (May 21st) in about 1522. It is thought St Collen

has a connection with Colan, in Cornwall and Langolen in Brittany.