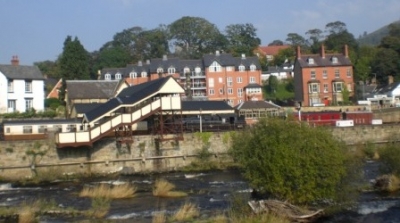 Like many towns in Britain, Llangollen saw a rise in civic pride in the 1860s.

and generally the pattern for institutions such as the police and local government was set.

In December 1858 over 40 plots of land, including the entire layout of New Street (now Castle Street)

was auctioned at the Hand Hotel. Morris Roberts bought several plots and in 1867 began building the Assembly Rooms

Many of the houses in Abbey Road date from this period as does the Cottage Hospital, sadly closed in spring 2013.

and another element of Llangollen’s Victorian Panorama, the railway, came to Llangollen in the early 1860s,

ensuring the demise of the importance of the canal and stage coach, while a hundred years later it was itself a victim of Dr Beeching’s axe.