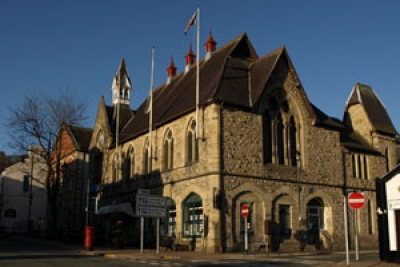 Llangollen Town Hall was built by Morris Roberts who was also responsible for several other buildings in Llangollen,

such as the National School in Regent Street (now St Collen's Community Hall).

In December 1858 over 40 plots of land, including the entire layout of New Street (now Castle Street)

was auctioned at the Hand Hotel.

and Market Hall (now the Town Hall) in 1867. The Market Hall was originally open to the street

and the arches were later filled in to make the shops we see today.

It was transferred from the ownership of Denbighshire County Council to Llangollen Town Council on 15th March 2012.

The building is in constant use by local groups and organisations and there are regular performances of opera,

amateur dramatics and concerts, while a market is held upstairs on Friday mornings.