What's on in Llangollen 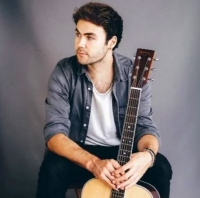 Kick starting The Royal Hotel's Christmas season (dare we say it!) is the very talented Alx Green. He will performing live in the bar/ lounge area from 7 - 9pm. Arrive early to get a table!

Alx Green is a singer-songwriter from Chester in the North West of England. Seamlessly fusing modern folk music with dynamic vocals, invigorating melodies and percussive finger-tapping his songs have a fresh new feel but retain that classic songwriter sound.

Alx has released several demo EP’s and embarked on a successful three month European tour in 2015. His first studio EP was released in 2016 and got to number 2 in the iTunes Singer/Songwriter pre-order charts. The tracks have also seen radio play on BBC Radio 2, BBC 6Music, BBC Radio Merseyside and BBC Introducing being labelled as ‘Sublime sounds’.

Food will be served from our bar/ restaurant menu from 12 - 9pm and also keep an eye out for any specials from the head chef Craig!