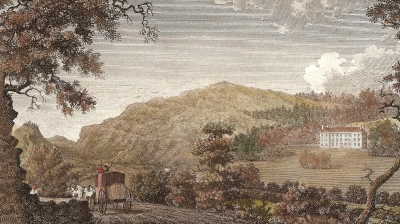 Llangollen is generally regarded as a Victorian town, and it is true a great deal of the planning and building

of the town we see today was done in the second half of the 19th century. However, underneath the Victorian veneer

is a vibrant Georgian history.

Since early times, the town has been an important stopping place, especially for people travelling from London to Ireland,

allowing hotels, inns and businesses to flourish. Until the early 1800s, roads were notoriously hazardous

and North Wales in general, allowing the London mail coaches to travel faster and more safely.

Telford was also responsible for the Pontcysyllte Aqueduct built in 1805, now part of the UNESCO World heritage Site.

The romantic landscape of the Vale of Llangollen, enclosed on one side by Castell Dinas Brân and the dramatic limestone

escarpment at World’s End, and on the other by the slopes of the Berwyn Mountains, has inspired writers and artists for centuries,

casting a spell on local poets such as Jonathan Hughes (1721-1805) as well as nationally renowned painters like J.M.W.Turner

and Richard Wilson. In 1778 Eleanor Butler and Sarah Ponsonby (the Ladies of Llangollen) found refuge from their problems

in Ireland and decided to settle here for the rest of their lives, moving to Plas Newydd in 1780.

with France in the late 18th and early 19th centuries, when the Grand Tour of Europe became extremely