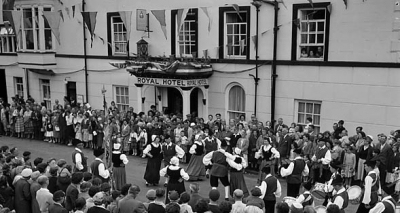 Originally the King’s Head, the name was changed to the Royal Hotel after the visit by Princess Victoria

(the future Queen Victoria) and her mother, the Duchess of Kent in 1832. It probably dates

from the mid 18th century and like several hotels in Llangollen, would have provided a

This was where Jonathan Hughes won the Chair at an eisteddfod on 6th January 1789.

1957 International Eisteddfod outside the Royal Hotel.